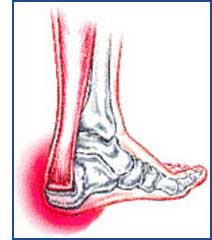 Achilles Tendonitis tends to occur more frequently in older athletes than in younger athletes. As a person ages into their thirties and especially into their forties and fifties, the Ligaments and Tendons in the body tend to lose some of their flexibility and are not as strong as before. This predisposes older individuals who participate in high impact activities, to Tendon injuries. However, Achilles Tendonitis can also occur in younger individuals who are very active as well.

Achilles Tendonitis is diagnosed by collecting a history and conducting a physical examination of the patient who describes pain at the back of the Ankle when walking and/or running. The pain generally will be associated with an increase in the intensity or frequency of physical activity. It also often occurs when a person changes their footwear and begins to wear a minimalist shoe as opposed to a traditional running shoe. The pain from Achilles Tendonitis is often so severe that running is impossible and even walking is uncomfortable.

Achilles Tendonitis generally responds very well to conservative treatment as long as it is diagnosed and treated early. Surgery is rarely indicated unless the Achilles Tendonitis is particularly severe and chronic, or if the Tendon has ruptured completely.

Initially, the Chiropodist or Podiatrist may treat Achilles Tendonitis by putting heel lifts or orthotics into the patient’s shoes. In addition, the Patient may be asked to avoid walking barefoot or walking in low-heeled shoes. Non-steroidal anti-inflammatory drugs (NSAIDS) such as ibuprofen (Motrin, Advil) and Naproxen (Naprosyn, Aleve) may also be prescribed to calm the inflammatory process in the Tendon. Icing may be suggested to help decrease the inflammation and pain in the Tendon. Stretching exercises for the Calf Muscles may also be given to the patient to help loosen the Calf Muscle and Achilles Tendon so that it is not under as much stress during normal daily walking activities. Stretching should not be done however if it causes pain in the Achilles Tendon.

Initially, a patient with Achilles Tendonitis will be asked to modify their activities to decrease running and jumping activities in favour of alternative physical activities, such as swimming, which doesn't put as much stress on the Achilles Tendon. As the Tendon begins to heal, the Chiropodist or Podiatrist will allow a gradual return to normal activities. If a normal return to activities is not possible within a few weeks, the Specialist may additionally prescribe physical therapy and/or functional Foot Orthotics to help the Tendon heal more rapidly. The Foot Orthotics are generally used during sports activities and while walking to allow for more normal foot and Achilles Tendon function. If the Specialist is concerned about a partial tear of the Tendon the patient may be placed in a below the knee cast. In this case, it can take several weeks or even months for the Tendon to heal depending upon the severity of the injury to the Tendon. It is not uncommon for a patient to return to activities too quickly and re-injure the Tendon. Careful monitoring after a return to full activity is important to reduce the likelihood of recurrence.