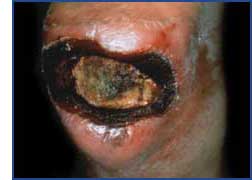 Diabetes Mellitus was first described in tge medical writings of fifth century (BC) Greece. The name itself is derived from the Greek Words (dia, through; bainein, to go; melitos, honey). Diabeties was diagnosed by the sweet taste / odour of a patients' urine, their excessive thirst, and the agony of their inevitable death.

Although the method of diagnosis was slightly less crude by the beginning of the twentieth century, little else changed in the natural history or course of this disease for 2500 years. Only with the discovery of insulin by Banting and Best in the year 1922 did the modern era of diabetes as a chronic, nonfatal disease begin. In the more than 75 years since that landmark discovery, the science of medicine has unfolded the myriad multi-system complications by which this protean disease is now well known. 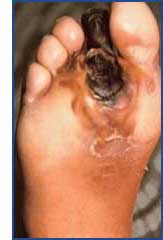 The Canadian and American Diabetes Association currently estimates the diabetic population in the United States and Canada as 25 million and rising, as the average age increases. This is because the likelihood of developing diabetes increases as we age. At least half of all people living with diabetes, are estimated to be undiagnosed. Foot problems (especially infections), are one of the most common complications requiring hospital admission. In fact, an estimated 25% of all diabetic patients' hospital admissions are due to pathological conditions of the feet.

Far from being an esoteric problem, the diabetic foot and its complications are encountered by practitioners, in many different specialties – Chiropodists, Podiatrists, General Practitioners as well as Orthopaedic Surgeons are all frequently exposed to Diabetes related pathologies.

The incidence of diabetes has increased dramatically in people over the age of 40, with an estimated 15% of the population over the age of 65 being affected. The cost in morbidity, mortality, and time lost from work and family, is staggering. 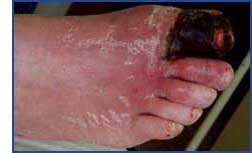 More than half of all non-traumatic amputations are performed in diabetic patients, who have a higher risk of developing peripheral vascular disease, gangrene in an extremity, or requiring a major amputation. Each of these conditions carry a higher mortality rate than in non-diabetic persons. The risk of developing peripheral vascular disease increases with the duration of diabetes. The pathways to amputation are varied because of the multiplicity of pathological changes that affect the diabetic lower extremities. 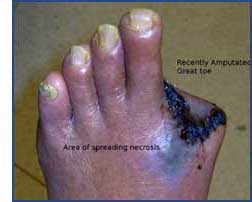 The severity of the complications of diabetes in the foot is not necessarily related to the severity of the disease itself. The majority of complications occur in patients with milder forms of the disease, such as those with non-insulin-dependent (type II) diabetes mellitus (NIDDM), who account for the large majority of the diabetic population. Despite the massive advances in the field of diabetic foot care, including better control of hyperglycemia, the discovery of a multitude of new antibiotics, advanced surgical and nonsurgical techniques for vascular reconstruction and excellent foot care practitioners, the treatment of problems in the diabetic foot remains obscure, if not puzzling to many physicians and foot specialists.

Common in diabetic feet, gangrene is typically caused by a combination of

Currently, the best of all possible standard medical diabetic foot treatments is revascularization (restoration) of the affected organ, which can reverse some of the effects of necrosis (tissue loss) and allow for normal healing of the tissues.