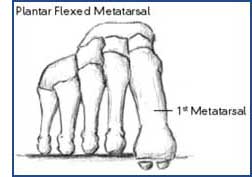 A dropped metatarsal head is a condition wherein one of the metatarsal bones (usually the second metatarsal) is lower than the rest at the distal end.

Patients complain of pain and a sensation that they are walking on a stone or pebble. Patients often develop a callus under the area of the dropped metatarsal as a result of pressure.

This condition is very common and is considered to be almost strictly hereditary. Over-pronation of the foot, does play a role because abnormal weight distribution can offload too much pressure onto the second metatarsal.

The patient should be fitted with custom foot orthotics to correct any abnormal pronation. The orthotics should include a metatarsal pad under the dropped area, which will raise the area and alleviate pain.