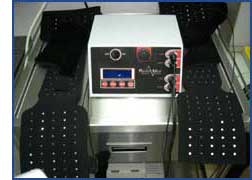 Light therapy (laser procedures) has been shown in over 40 years of independent research worldwide to deliver powerful therapeutic benefits to living tissues and organisms.  Both visible red and infrared light have been shown to affect at least 24 different positive changes at a cellular level. Visible red light penetrates tissue to a depth of about 8-10 mm. It is very beneficial in treating problems close to the surface such as wounds, cuts, scars, trigger and acupuncture points and is particularly effective in treating infections. Infrared light penetrates to a depth of about 30-50 mm which makes it more effective for bones, joints, deep muscle tissue, etc.

The diverse tissue and cell types in the body all have their own unique light absorption characteristics; that is, they will only absorb light at specific wavelengths and not at others. For example, skin layers, because of their high blood and water content, absorb red light very readily, while the calcium and phosphorus content found in deeper tissue and bone,  absorb light of a different wavelength.  LED’S and LASERS are no more than convenient devices for producing electromagnetic radiation at specific wavelengths.  Several studies establish that it is the light itself at specific wavelengths that is therapeutic in nature and not the machine which produced it. Light Emitting Diodes (LED’S) are another form of light therapy that is a relatively recent development of the laser industry. LEDs are similar to lasers in as much as they have the same healing effects, but differ in the way in which the light energy is delivered. LED disperses over a greater surface area, which results in a faster treatment time for a given area than laser.

Effect of the anodyne laser

Increase vascular perfusion (circulation) by increasing the formation of new capillaries, which are additional blood vessels that replace damaged ones.  New capillaries speed up the healing process by carrying more oxygen as well as more nutrients needed for healing. New capillaries also aid in the elimination of waste products.

Increase lymphatic system activity.  Edema, which is the swelling or natural splinting process of the body, has two basic components: The first is a liquid part which can be evacuated by the blood system. The second component is comprised of proteins, which must be evacuated by the lymphatic system.  Research has shown that lymph vessel diameter and the flow of the lymphatic system can be doubled with the use of light therapy.  The venous diameter and arterial diameters can also be increased, meaning that both parts of edema (liquid and protein) can be evacuated at a much faster rate to relieve swelling.

Induce a thermal like effect in the tissue.  Light therapy raises the temperature of the cells, although there is no heat produced from the diodes themselves.

Stimulate tissue granulation and connective tissue projections, which are an integral part of the healing process of wounds, ulcers or inflamed tissue.